So a lot’s been going on this past week…

Big Apple Underground – Winter Wasteland Compilation:
Martin Atkins is back in NYC next week doing a lecture for Tour Smart and I was asked to help promote the event and possibly help out with the night. I offered to run the merch table in exchange for the ability to hand out t.o.t.s. promo stuff along with all merch sold. So, I needed something last minute to give away so I decided to create a last minute promo compilation. The compilation is a quick assembly of acts I’m directly involved with to some degree or another… t.o.t.s., The Qualia, Hate in the Box and Mr. 1234. Two tracks were supplied by each act. Got the news about the lecture at 10:00 PM Sunday, by 2:00 AM Monday morning the comp was ready for production and a website supporting the compilation was thrown together. There will only be 100 copies of the compilation made and they will be free to anyone at Martin’s Seminar on Monday, December 10th @ 5:00PM. The seminar will be held at Lit Lounge @ 93 2nd Avenue, NYC. For more info on the “Big Apple Underground: Winter Wasteland Compilation” check out:
www.bigappleunderground.darksonus.com.

The Ghost of Adrenalinn Past:
After seeing the Adrenalinn pedal in action during our many Qualia practices in the past few weeks I decided I needed one for t.o.t.s. and so I wrote to a random post on the San Francisco Craigslist. When I got a reply from the seller it turns out we knew each other from 11 some years ago. His band Family Auto Group had opened for the pre-t.o.t.s. band “Blood in Vain” at a show I produced back in 1996 and we had performed together again later for an experimental one-off called “Elohim” in ’97. After chatting a bit we’ve decided to start shooting some material back and forth. I have no idea what the end results are going to sound like but aside from playing in 3 bands right now, working on the new CD and a new soundtrack… why wouldn’t I start up a new project? This is precisely why we need a good manager… I apparently have massive ADD or something. Oh and the pedal is on the way :). 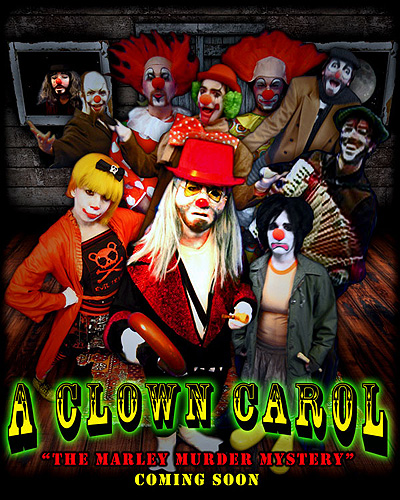 Clowns of Xmas Future:
Just finished production on Blights new film this weekend, a bizarre rendition of A Christmas Carol… with a cast of clowns! The shoot ran about 16 hours this past Saturday and will probably occupy a good deal of time in post. Blight directed the film and will be handling all of the CGI, compositing and editing for the project. I did all the live sound and will be composing the score this week. Other past t.o.t.s. contributors were in on the fun… Elias (BiFF JUGGERNAUT films) was on the set cast as one of the clowns, Rainbow Blight (Hate in the Box) handled all the make-up chores and also appeared briefly on screen, Jerrod (director of the recent film Marathon that featured t.o.t.s. music) handled all the AD work and turned in a great performance and Kalin was behind the camera once again… you’ve seen Kalin’s handy work on the recent t.o.t.s. photos. The guy is awesome. Anyway… you’ll be hearing a lot about this film as post-production continues.

That’s about it for now… that and I’m pretty sure I’ve figured out an excellent way to restructure the entire recording industry. I’m writing notes on that as we speak. It’ll probably end up as an article on DarkSonus sooner or later. I’ve already got some programming pals o’ mine working on a potential interface to test out the idea.