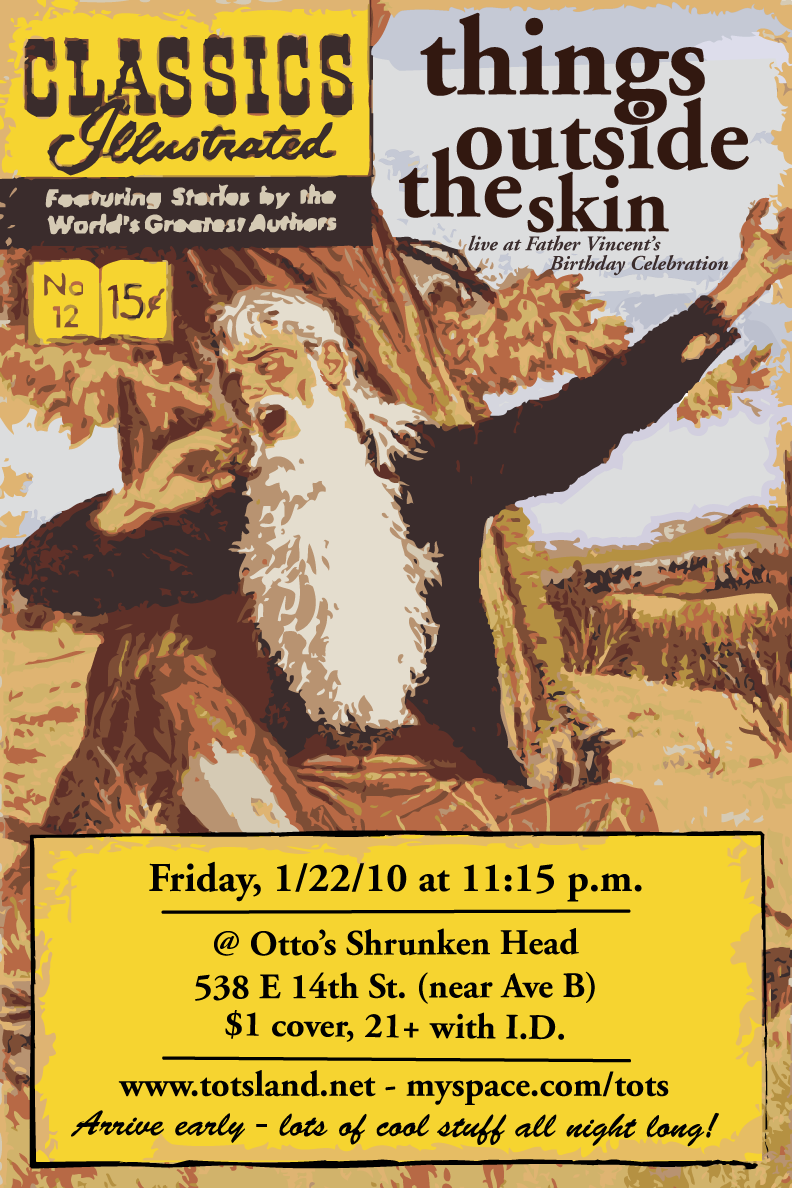 Members of the Brooklyn, NY based band, “THINGS OUTSIDE THE SKIN” have been reported missing for almost a year now. Their whereabouts have been unknown since Jan. 20th 2009 immediately following their last known performance at Otto’s Shrunken Head in Manhattan. Band members Chvad SB, Blight the Clown, Lars Casteen and Ericah Hagle have, for the past 11 months, been officially declared missing persons according to the NYPD. When questioned about whether or not the members of the band are still being looked for, the NYPD declined to respond. Despite this, there are now flyers circulating throughout NYC declaring that “THINGS OUTSIDE THE SKIN” are supposedly playing a show on the 22nd of January 2010. A cruel joke? According to fans present at their last performance, maybe not. When interviewed, t.o.t.s. fan Stacy Rocketdrive had this to say, “When they left the last gig… they were exhausted. More so than usual. The show was exceptionally intense and afterwards they just kept mumbling about needing a nap.” She continued to speculate wildly, “I suspect they’ve just been sleeping.” SLEEPING FOR YEARS? Maybe not so absurd. When questioned, Dr. Harry Hinkowitz, a sleep specialist and fan of THINGS OUTSIDE THE SKIN had this to say when questioned: “Of course, like most other fans, I had rightly assumed alien abduction.  However, when reviewing notes and fan testimonies about how sleepy they were after their last performance, I began to suspect ‘Van Winkle Syndrome.’ In my professional opinion, it is very likely they have simply been asleep.” According to Hinkowitz, Van Winkle Syndrome on the average lasts for a year so that it is in fact very likely the band have scheduled a gig exactly one year later. As the gig takes place at the same venue, for the same event and at the same time, many fans are speculating the possibilities of time travel or a “time warp.” When questioned about this, Father Vincent, birthday boy and organizer for the event at Otto’s this Friday only had this to say: “Outrageous. Time travel is silly. I’m fairly certain they have been sleeping. They might look, smell and play like shit but I am POSITIVE that cupcakes taste yummy.” HAVE THINGS OUTSIDE THE SKIN RETURNED FROM OBLIVION? Go to Otto’s THIS FRIDAY to find out for sure! Details below: