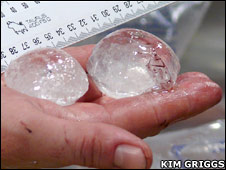 These are lenses from the eyes of a Colossal Squid. These eyes are the largest known in the animal kingdom.

Throw man into this mix. I can only hope that one day nature hands our asses back to us on a plate and bump us a wee lower on the food chain. Heh heh… back to the sea kiddos. Back to sea.

More on Colossal Squid and less on my idiotic ranting here:
http://news.bbc.co.uk/2/hi/science/nature/7374297.stm

You see? THIS is what I’ve been screaming about….

Arctic sea ice shrank to the smallest area on record this year, US scientists have confirmed.

END_OF_DOCUMENT_TOKEN_TO_BE_REPLACED 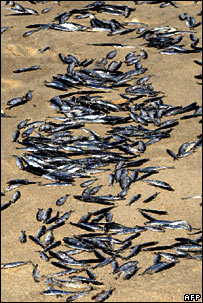 Humans rampant assault on the environment only gets worse as hypoxic water zones only increase in size this year.
Read more on this article HERE.
Read more about Hypoxic Zones and what causes them HERE.

The newly discovered “super earth” rocks my boat in a major way people. Its easy though… I eat shit like this up.
Click HERE for all the info. 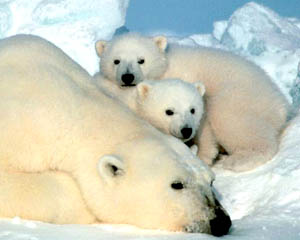 There are only 20-25,000 scattered throughout the Arctic, and rising temperatures and industrial pollution are driving them to the brink of extinction. In December, officials at the U.S. Fish & Wildlife Service announced a proposal to list polar bears as “threatened” under the Endangered Species Act. Securing this “threatened” status will provide crucial protections that can help ensure the survival of our polar bears.

Human activities have put polar bears in danger, the future of the species is threatened both by pollution and climate change.

Toxic pollution from industrial emissions builds up in the food chain. By the time it reaches polar bears at the top of the food chain it’s strong enough to cause birth defects and inhibit development.

Global warming also causes Arctic ice to melt earlier in the summer and freeze later in the winter, shortening the polar bears’ hunting season. For every week lost on the ice, the bears lose about 22 pounds of fat. Thinner bears tend to give birth to fewer cubs. Rising global temperatures have caused polar bears’ birth rates to decline by 15%.

The deadlone for public comment is April 9th. Don’t be an asshole… DO SOMETHING ABOUT IT.